I grew up on a show horse farm. Creative problem solving is part of everyday life with animal training, so I was “inventing” things at a very young age. My formal education is in nursing. I have worked everywhere from acute rehabilitation to cardiac intensive care, pediatric and adult care. Nursing requires a fair amount of creative problem solving, too, so my childhood skills dovetailed into my adult career quite nicely.

The EZ Empty Urinal is a urinal that empties itself. It works the same as a traditional urinal in the horizontal position (just pee in the jug) but when returned to the upright position the bottle empties to a large canister using suction. This promotes patient privacy and independence. No urine spilled on the patient or the bed. No smelly container of urine hanging from the bedrail or sitting on the bedside table. No hitting the call bell and waiting for nursing staff to empty the urinal to be able to use it again. It’s a win/win for patients and nursing staff. 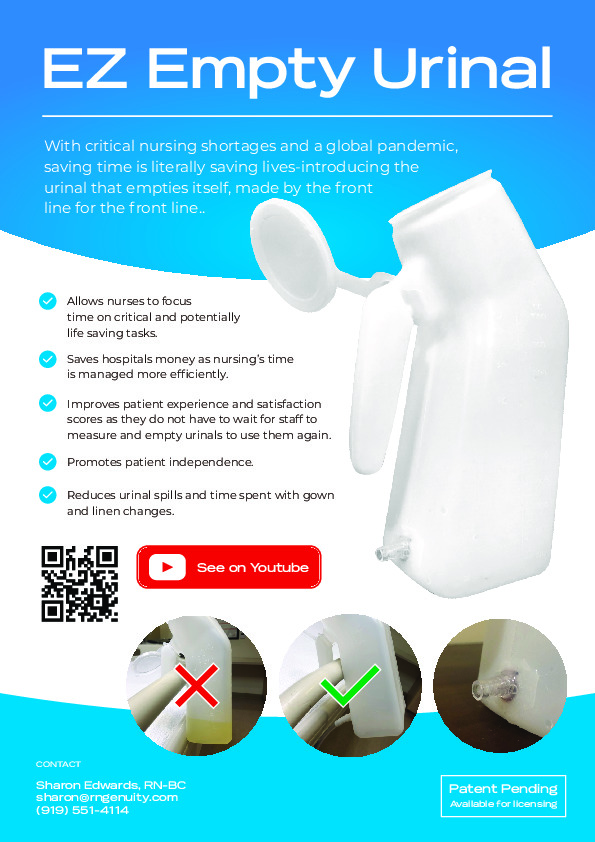 Other products soon ready to license include the Line Tine (an IV line organizer), Crack Wrap (keeps stool from migrating under sacral dressings), Boost’N Stay (a turn pad that stays in place when patients are boosted up in their beds), Yankeur Caps (exactly what it sounds like), and the Change Alert System (system that triggers the nurse call light for patients who are not able to call for help when they have soiled themselves).

The pandemic. We have been swamped with patients and short on staff. There has been no option but to get creative with ideas to save time and improve efficiency.

I feel like there should be some kind of honorary six sigma specialty certification for frontline staff working this past year. Lean “manufacturing” patient care learned via trial by fire?

I had the first idea when we were super short staffed at the hospital. I two patients in ICU that day. I would like to say it was an unusually chaotic day but for the year 2020 it was just a day like all the others. Another day in paradise during a global pandemic.

Patient A was admitted with heart failure. He was alert, a walkie-talkie from home in fluid overload. His treatment, BiPAP and diuretics until the fluid is off and he can walk, talk, and breath at the same time again. He was stable and using his urinal in bed. We try not to use foley catheters any more than we have to because of their associated risk of causing a urinary tract infection.

Patient B was not stable at all. He was on a ventilator with 12 or so IV meds going at once to keep him alive. I was hanging on by a thread, watching his vital signs, titrating drips, sending labs, and watching for the new orders that were coming in left and right. The pressure in situations like that is so high. After the zillionth call bell from Patient A asking to have his urinal emptied while Patient B was trying to go meet Jesus against my will, I thought there had to be a better way. Then it hit me. Merge the concept of the female external catheter with a urinal and, poof, ten call bells to dump pee becomes one trip to the room to empty the canister at the end of a shift.

Would it work as I pictured it in my mind? I hopped on Amazon and bought supplies to cobble together a prototype with craft knives and Gorilla Glue. The first one bombed. I used a valve instead of a simple male connector. It drained but painfully slow. The second design worked absolutely perfectly.

Armed with a working prototype and info from a book called One Simple Idea by Stephen Key, I was off to work my way through the ten steps to product licensing. And then I bombed again. Well, bomb may be too strong of a word. I lost confidence. In the moments when the idea was coming together, there was an energy that pushed me forward. Creativity is just fun. As the steps became more tedious I questioned my sanity more and more. Diagnosis: analysis paralysis. If this was going to fly, I needed more support. I bit the bullet, coughed up the cash, and joined the inventRight program.

I am an idea person, not a business person. Hiring a coach who has a proven track record in taking a project from concept through licensing has kept me focused and moving methodically ahead. My first product is ready to license and five more are cued up behind it. I am very appreciative to Stephen Key for writing the book that sparked this venture and to my InventRight coach, Les Williams, for giving me the confidence and support to keep it moving forward.

One Simple Idea by Stephen Key and inventRight

My first product is available for licensing now. Several manufacturers are expressing interest in it. The next five are either prototyped or in the prototype process.