I’ve been a Dad of two great daughters, now in their twenties, so now I get to sit back and watch the show.

My product, which is covered by patent US 9,010,021 is a flower pot that allows the gardener to adjust exactly how much water the pot retains. 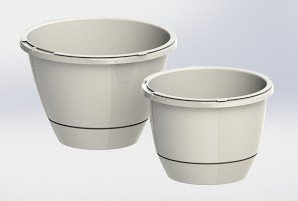 Every flower pot on the planet has one of two problems.  It has a hole or it has no hole.  Under either scenario, most people watch their plants die.  I spent years having that same experience.  The solution was making a pot that has an adjustable water retention system.  All plants want well drained soil, it is simply how long do they want their roots moist.  With the Dial-N-Grow, the commercial name of the product, the water level can be set from total drainage, desert plants to almost no drainage, swamp plants or anything in between.  The only additional cost, above everything else on the market, is an additional liner inside the pot.  By turning the liner within the pot, the drainage point can be adjusted for any type of plant.  Gardeners can never over or under water their plants.

I never had any ambition of being an inventor.  While watering hanging baskets on my front porch, plus multiple others, with watering every day, I could barely keep them alive until tomorrow.  The southern exposure was brutal.  I knew that there had to be a way to adjust how much water could be retained.  You can’t just drill holes in pots that don’t already have a hole.  That solves nothing.  A couple of years later, the solution just popped into my head.  I do have some plastic moulding background, but nothing was going to happen with my solution.  Three years later, with one of my best friends, we were pitching an idea for a new level that he had patented to a large infomercial company in Wisconsin.  They loved the idea and did move forward with it.  As the meeting was ending, the said that they though we were a couple of pretty smart guys and told us exactly what they want to hear about.

As we left the meeting, I told my friend that he had no idea regarding what happened in the meeting.  I let him know that I had a product solution which was exactly what they described.  We came back two weeks later with a very raw prototype.  We were asked to come back with another 6 prototypes.

How I got to the point of having a marketable invention was sheer luck.  I had a solution to a big problem in my head with no idea what to do.  In a very important meeting that had nothing to do with me, I recognized the opportunity that was laid before me.  After much work, I did get a licensing agreement that went all the way to having a prototype tool made for the flower pot.  It was not designed to be able to make product at distribution levels.  Shortly before the infomercial was to be shot, the company was purchased by a much larger infomercial group.  Any product that was not already in a commercial production was dropped.  Up until this point, I thought it was simple to get an invention to the market.  I’d just been lucky.  Since then, I’ve chased inventors trade shows.  I’ve been on inventor’s product competitions to see what the listeners or video channel think of the planter.  I’ve never had a single negative vote.  I’ve had multiple licencing deals, but none gone anywhere.  There has been one huge drawback.  I do not have a molding production tool.  At $30K plus, this is not something that I can fund.  Every licensing agreement that I signed was for a limited amount of time.  The big hurdle was for a company to get an initial purchase order to cover the product and tooling costs.  It never happened.

Seven years ago, I believed that a simple idea was going to change my life with little to no work.  I’ve been to trade shows all over the country.  I’ve talked to anyone that will listen.  Knowing that my invention satisfies all of the infomercial criteria keeps me going.  The big lesson that I have learned is that regardless of what you think your invention is worth, you need to know the commercial equation solution needed to have someone jump to take it market.  I’m close, but I stay with working to make it happen.  Discouragement is a constant companion.  If you accept failure, even though you know and understand the financial equation that you must solve and satisfy, forget success.

Discouragements come easily.  I lack a production tool.  I keep contacting moulding companies as to the new cost of the tool.  As technology advances, the digital tools required to make the mould continue to become less expensive.  It’s still out of my reach.  I have no social media presence because more rejection really hurts.  The closer you get to success, the steeper the hill becomes.  Get ready for the pain.  You will need to become forged by a hotter fire.