I grew up in the suburbs of Pittsburgh. I came from a creative family, especially my mom. I was taught early on how to sew and do crafts. Those type of things always came easy to me. I loved creating. We were not poor, but definitely didn’t have the ability to buy whatever we wanted, therefore I learned early how to Frankenstein things together, even though I did not know it at the time.

I began to struggle in school around 9th grade. I had a difficult time taking tests, panic attacks and a constant battle to retain information where normal for me.  I was told I just needed to try harder. When I tried harder I still failed.  I was a daydreamer and I got annoyed with things very easily. Always wondering off, in my mind and dreaming of things I wanted to accomplish, especially inventing small things that fixed problems that frustrated me. I have many pet peeves. Although we didn’t have a name for it in the 70’s. I am sure I would be diagnosed with ADHD, Misophonia and a boatload of other things. I have learned how to use my defects as assets in my life. That was about the time I found alcohol, it became the answer to my troubles. Alcohol made me feel normal.  It also began to affect my life in a very negative way. For the next 20 years I would battle with a drug and alcohol addiction that would tear my life apart and all those who loved and cared about me.

In 1997 I ended up homeless in a shelter. I had 2 choices go on to the bitter end or get control of my life. I decided the latter.

For all those years I was drinking I was also dreaming up new ideas. I had a mind that just could not quit creating. Blessing or curse, guess it all depends how I look at it.  Now clean and sober it was time to put some dreams into action.

It has evolved into a caddy that can be used anywhere vertical storage is needed. Campers, workshops, craft room, closets, pantry the list is endless.  Easily attaches to a hook or rod with grommet or Velcro fastener. The 7 pockets are different sizes to hold a variety of items. 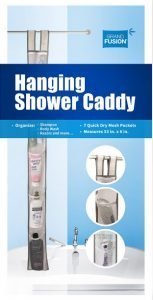 I have invented many products over the years. Simple ideas that never made it past the prototype stage. I was good at getting it to that point but always at a loss about what to do next.

I had no idea how to get something produced and on the market for sale. I tried many different things, spent a lot of money, and wanted to quit many times.  In 2005 I joined my local inventors Group  Washington DC, The Inventors Network of the Capital Area.

I feel I was born creating and inventing. I can never remember a time that I wasn’t fixing something or inventing something to make my life easier. What set me off was the fear that I waisted so much time squandering my gift of being creative that I got really mad at myself and decided to put this into action full steam ahead.

I attended the Chicago Housewares show in March 2018. I was walking the floor to see if there might be any companies interested in my Hanging Shower Caddy. I met Grand Fusion Housewares. I reached out to them the following month, presented my product idea. They were interested and asked for a prototype. Because I am a seamstress, I was able to send them a looks like, works like prototype. There are many steps in between from me sending a prototype and the Hanging Shower Caddy being retail ready.

This process took approximately 18 months from the time I showed it to Grand Fusion Housewares to the Hanging Shower Caddy being available for retail in Sept 2019. 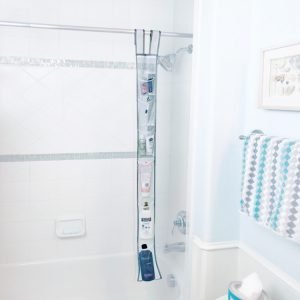 My mother always said “If you hang around those people you will be like those people” I never understood that when I was young. But in my experience, she was spot on. When I decided to get serious about inventing, I began to hang around with other inventors. I joined my local inventors group and went to every monthly meeting. I showed up and began to get to know the lingo and the way things work.

I started reading articles and books on inventing. The one book I mentioned before is “One Simple Idea” by Stephen Key was the book that really changed my inventing journey.

I started showing up at trade shows so people would know who I was.

I became an inventRight student and took advantage of everything they had to offer.

I began to learn how to utilize social media. Especially LinkedIn by reading another book by Stephen Key and Benjamin Harrison called Licensing Ideas using LinkedIn.

Listening and watching 100’s of YouTube videos on the inventRight channel.

Most of all and probably most important I did not quit, even when I wanted to many times.  I was persistent and consistent.

And it has paid off.

I enjoy sharing my experience in hopes it will help other inventors to achieve their dreams of seeing one of their products on the market. There is no greater feeling for an inventor.

The Hanging Shower Caddy has been on the market since Sept 2019.