My first job was working for the federal government as an analyst.  I left to go back to school.  After earning my MBA from Virginia Tech, I took a job in mortgage banking.  I joined at the time when banking was consolidating.   Lots of mergers and acquisitions with downsizing and outsourcing.  My certified residential appraiser job was outsourced into an independent contractor job so I decided to look for a more secure career.  It appeared to me that this new industry -called the internet- (late 1970’s) looked like a growth industry that could give me some job security and the county was offering downsized bankers training in coding for it.  While earning my MBA I had to learn Fortran so I knew I could code so I signed up to learn HTML, JavaScript, etc.  I took a job putting a companies Intranet live then got a job with Booz Allen Hamilton, a government contractor.  Hard coded lots of government web sites before coding became automated – point, click, drop, drag.  One of the government contracting jobs was related to banking and it evolved into me getting back with the federal government as a commercial loan officer in the U.S. Small Business Administration.  I am currently retired.

My current product helps people wear their seat belt comfortably and safely.  It stops the shoulder belt from cutting into the neck and/or rubbing the chest.  This discomfort can cause some people to adjust this belt.  Some wear it under their arm, behind them or too loose.  These adjustments compromise their safety in case of a crash.  Customers have told me of other situations that need a product so they too can ride comfortably and safely.  Chemo port and pacemaker patients need help as well as off road harness wearers.  Products to solve these issues are being developed. 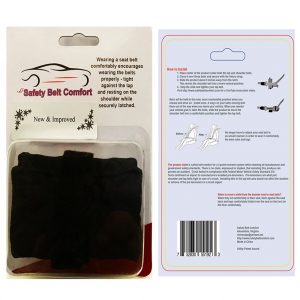 I went to my Aunts’ 100 birthday party and on the way to the venue she complained bitterly about hating to wear her seat belt.  She tasked me to ‘fix this’ for her.  She is my favorite and if she thinks I can do this for her = OK.

I thought my task to ‘fix this’ would be easy.  All I had to do was go to auto aftermarket stores and buy products, test them and when I found the best one, send it to her.  I went to every auto aftermarket store I could find and purchased every one that stated it would solve this discomfort problem.  None were good enough for her so I made one.  Before sending it to her I had to ensure it would be safe for her to use so I called the Insurance Institute asking for a company that tested seat belts.  They directed me to MGA Research.  I did not influence any method to test this prototype under so they decided to test for Federal Motor Vehicle Safety Standard (FMVSS) 210 compliance.  The result was no attachment failures.  I sent the product to her and she told me “this works, share it”.  I applied for a utility patent and it was issued.   Once my idea was protected, I put it up on Amazon. 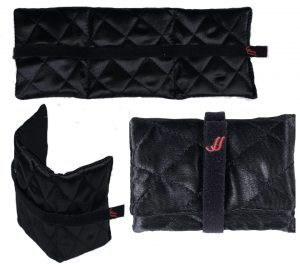 As an Affiliate, we may earn from qualifying purchases