I have been fascinated with Inventions and the great inventors that shaped our world since a very young age. I developed hobbies in these fields and I taught myself the world of science, physics, electricity and electronics, well in advance of any learning I received in schools. When I was in grade 10, or so, I designed and made a working prototype of the world’s first “talking” calculator for the blind. I sent the details to CNIB here in Canada, only to find out that a Swiss company had already beat me to it. That turned me off of Inventing for quite some time. Through this, I learned about Patents. My next attempt at inventing was at the age of 24, where I made a set of noise cancellation headphones for noisy environment hearing protection. I submitted the concept to a firm called The Canadian Innovation Centre for a paid evaluation. They indicated that it probably wouldn’t work and there was a very small market potential for it. It turns out that it has been marketed successfully for many years now…by someone else. Another turn off. This happened many times throughout the years. I then found work in the consumer small appliance repair business for ten years. Next job was at O-Two Medical Technologies, where I started as a field service technician, moved up to  Quality Assurance, then into Product Development where I created all the initial prototypes and product development for all the products they still sell today. To date, my inventions have generated more than $100M CAD in sales since 1992. I won a Manning Innovation Award for a miniature confined space gas powered resuscitator for Shell Canada. It permitted immediate resuscitation in toxic environments instead of firstly having to remove the victim to fresh air.

Low input pressure alarm for gas input: The invention provides an in-line low supply pressure alarm device powered solely by supply of pressurized gas from a gas supply for providing an alarm signal when supply gas pressure is below a selected minimum pressure. No batteries required.

Automatic transport ventilator with monitoring alarms: An automatic resuscitation device for administering a breathable gas under pressure to a patient by an operator where all operating controls and alarms are powered by the pressurized gas in a manual override mode, a patient breathing deemed override mode, and an automatic mode. The device uses no power source other than the pressurized gas to drive alarms and the entire control system. No batteries required.

Automatic resuscitator: An automatic gas powered resuscitation apparatus for administering a breathable gas to a patient that can be held in one hand, and containing the necessary valves and controls, and operable in automatic mode, demand mode, and manual mode. 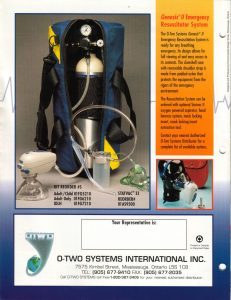 I received a Manning Innovation Award for a miniature confined space gas powered resuscitator for Shell Canada. It permitted immediate resuscitation in toxic environments instead of firstly having to remove the victim to fresh air. Many other models were spin off’s from this product.

Low cost disposable gas powered, time cycled automatic resuscitator-ventilator device: Automatic resuscitation-ventilation devices are very expensive and in order to address respiratory pandemic viruses, this would be an effective low cost solution to the issue of supply and demand should a pandemic occur. Two breadboard prototypes were manufactured that are very reliable.

Unique pump-compressor Design: Typical compressors are most often copies of existing equipment which have many known issues and problems. They are bulky, expensive and service prone. The design is extremely simple with very few parts which minimizes service requirements, cost and is also very easy to disassemble and reassemble compared to existing equipment.

Nothing like this product existed anywhere. It took many, many attempts to get it to work properly; I made all the initial prototypes with my own hands. It was frustrating at times, but it was a challenge I couldn’t resist.

Finally, I headed up their Research and Development department. I did not have an Engineering certificate through all this. I ran out of opportunities at that firm, and as I had many inventions that I wanted to pursue, I found an Angel Investor to fund a start-up. It was a big decision for me, as I had been employed at this one firm for 24 years…but I had to try. I had this once in a life time, no risk opportunity to take one of my own inventions forward. If I hadn’t at least tried, I would have kicked myself for the rest of my life, never knowing what would have come out of it. Things started off okay, but we had trouble finding a specialized Respiratory Medical Device Engineering firm to design the prototypes. We got “Bamboozled” by two engineering companies, and after two and a half years, and $650,000 invested, the Investor pulled the plug. Quite often things go awry with product development. Just near the end of this period, we finally found a great engineering company to work with that produced two functional prototypes, but by then, it was too late. That investor now owns the IP rights. Hopefully one day, one of my inventions will be marketed successfully and yield enough profit for me to pay him back. After this failed attempt, I found work in the field of automotive assembly pneumatic air tool repair. I could not get back into Product Development, Engineering or into any medical company due to my lack of required degrees and formal education. (Now we won’t bring up the fact that Edison only had three months of formal schooling….but 1,093 Patents were awarded to him over his lifetime. He was one of the richest, most influential individuals that shaped our century into the technology we have today. Intelligence, relativity and vision aren’t things taught, nor learned in a school.) I worked there for almost two years, and was laid off due to the economy here….perhaps a blessing in disguise as I hatednhaving this “normal” job…it sucked.  I really need to be in the field of product development though; it is the only thing I am really happy working at. It’s exciting.

Once again, I am currently trying to find another Angel Investor to move some of my other many inventions  forward. My latest invention is a very unique pump or compressor with a huge market potential….Many inventions I came up with years ago were eventually patented and marketed by other individuals or firms as time went by. I have a very long list of inventions I have come up with over time, but without funding to move them forward, there’s no use. Product development and patenting is a very costly endeavour …..but I’ll keep on trying, inventing is my purpose on this rock.