My name is Elizabeth Crouch and I am a Wife, Mom, Grandma, Patented Inventor, and most recently a Candle Maker.  Having moved from Oregon to Apache Junction, AZ just this month, we are happy to be living in the land of sunshine! 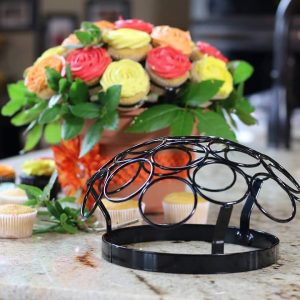 Working a desk job in a tiny little cubicle at our local tribal casino was beneficial and secure, yet I really wanted to venture out on my own and run my own business. I would watch Shark Tank every week and long to think of an idea that I could turn into a product and bring to market.

Then one day it happened!

A very talented woman I worked with at the casino loved to bake and decorate cakes and cupcakes and bring them to work for us all to test.  One of her beautiful creations were cupcake bouquets; cupcakes that were frosted so perfectly that they looked like real flowers and were displayed in a way in which they appeared to be in a bouquet.  I’d gaze at her displays as if they were grand works of art hanging in a museum and I’d think to myself that I could never create anything so beautiful.  After all, I had no cake decorating skills, no time, and no patience.  She was a master at her craft and I was awe-inspired!  If only I could make something that beautiful!

What if…!  What if I could make something that beautiful!  What if I could buy beautifully decorated cupcakes at the grocery store or bakery and drop them into a rack designed in the shape of a bouquet, a dome shape!  I wouldn’t need cake decorating skills, it wouldn’t take much time, and then anyone could make deliciously adorable cupcake bouquets in no time at all!  There it is!  An idea; finally an idea came to me that i could turn into a product!

I have always had a lot of ideas, but they were all fleeting.  Every time I thought of a good idea, I would soon forget about it because I didn’t know what to do with it.  They would leave my mind as fast as they came.  This time, though, I wrote down my idea.  I was not going to lose it, I was going to figure out how to turn it into a real live product that I could sell!  It would be great!

Researching on Google how to bring a product to market, I learned about patents, marketing, manufacturing, and every step of the inventing process.  Every step of the way brought new obstacles to overcome, but when you have a dream and passion, no obstacle is too big, although I must say there were a lot of tears when those obstacles appeared!  Somehow, with lots of prayers and help from my husband and children, we brought The Cupcake Rack to market in less than a year from conception and we were granted a Utility Patent one year after applying for it.

Since I was inventing on a budget (I had taken a loan out on my 401k), it was important to be very conscientious about every dime I was spending, so I did all the leg work myself; I learned how to build my own website, found a manufacturer in China, placed an order from them, learned about social media, applied to every tv show I could think of, and joined Inventor’s groups online to learn from the experienced.  At the time, Edison Nation had the best Inventor’s forums.  I became very present with them and made some of my best friends through their website!  Edison Nation was so full of kind and knowledgeable Inventors who all loved to help each other succeed.  When one succeeded, we all succeeded.

Our story took a drastic turn in the midst of our journey; it was April 7, 2013, just as my manufacturer was preparing to load our container full of our future, my six-month old grandson was brutally assaulted.  He was beaten so badly that the doctors gave us no hope of his survival.  However, God had other plans; he allowed us to keep our baby boy and has blessed us with his miraculous recovery ever since.  So, along with pushing The Cupcake Rack, I quit my job at the casino to care for my little grandson while his momma went to school and then became an RN. 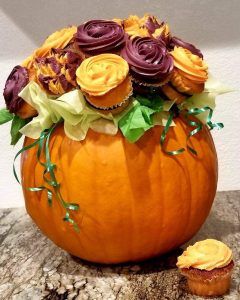 The Cupcake Rack brought about tons of great adventure; appearing on The Steve Harvey Show, exhibiting on Capitol Hill, a pitch contest on MSNBC Your Business with JJ Ramberg, appearing for ten minute live on HSN, appearing on Entrepreneur Elevator Pitch, lots of podcasts, the cover and six page spread on Inventors Digest, March 2019, and filming as a Mentor on the Emmy Award Winning Series, Everyday Edisons, Season 5 which is still trying to make it’s showing on air!

The Inventor community is rather small when you become a part of it!  I’ve made many, many great friends in the industry and have had a ton of love and support from these friends during the most difficult days of our lives, when Little Roy was hurt.  Even though many of them I have never met in person, I consider them to be some of my closest friends.

One of the best resources for Inventors today are the books written by Stephen Key about Inventing and Licensing.  He has several out now that can be found online and are filled with everything you need to know about inventing and licensing.  Or you can hire consultants from his group at InventRight.

Applying to all tv shows is one way to try to get your product known, just expect a lot of rejection!  If you believe in your product, keep pushing it!  Others may not see the benefit that you know is there, so keep pushing until the right person hears about your idea!

Learn your elevator pitch!  Be able to explain your idea in 30-60 seconds using only verbiage of benefits and why everyone needs your product!  Write down your pitch, memorize it, video tape it on your phone, play it back and honestly critique it.  Remember you’re talking to an audience who knows nothing about your product!  Explain it to them simply and effectively so they can visualize what it is.  Practice, practice, practice!  Be prepared for when that opportunity arises when someone actually shows interest.

Inventing is fun, exciting, frustrating, exhausting, exhilarating, and filled with ups and downs!  Enjoy the journey.  The end goal will probably change, as will the roads you take to get there; be flexible, open-minded, and honest with yourself.  Enjoy the ride!