I became the largest publisher of artwork from television commercials creating the first ever animation art lines for Coca-Cola, Anheuser-Busch, M&M/Mars, etc. Eventually I sold it all off to create CelebriDucks which was a whole new art form of celebrity rubber ducks of the greatest icons of film, music history, and athletics. They were voted one of the top 100 gifts by Entertainment Weekly and featured on hundreds of TV shows, magazines, and newspapers including The Tonight Show.  We have sold millions of them are considered the top custom duck manufacturer in the world doing them from everyone from SeaWorld to The New York Yankees.

I also addressed the importance of bringing jobs and industries back to America by returning the whole rubber duck industry back to America where the rubber duck was actually invented before the whole industry went overseas.  We are now the only ones making them here and are doing them for companies and organizations such as Harley-Davidson and The Future Farmers of America. Our  factory in Michigan is now making PVC Free rubber ducks out of food and medical grade materials which are considered the safest rubber ducks in the world for babies to teethe on.

I also just launched our new chocolate division, www.CocoaCanard.com , with our Spooning Chocolate, the only Dairy and Gluten free hot chocolate that can instantly mix up in a cup of hot water and you will never miss the milk. It is now the go to product in that category and considered the purest and finest hot chocolate on the market and uses Fair Trade chocolate.

I always like to do what has not been done before.  I am a huge believer in niche marketing and owning your niche.  I basically only move on things when I feel inspired and passionate about something.  That’s how the whole animation business began as I just loved iconic companies and their advertising characters.  The business began in a flash when I saw a window displays in Macy’s of all these old classic Coca-Cola machines and vintage advertising artwork. It was so inspiring and The Coke Polar Bear commercials were just coming out.  It was like an epiphany where I could see taking the famous images for all these different companies and how cool it would be to create art lines for them just like Disney and Warner Brothers did with their characters.

Well, the animation art we created was the Coca-Cola Polar Bears, The Bud frogs and lizards, the Pillsbury Doughboy, The Campbell Soup kids, The M&M’s, The Hershey Kisses, etc.  It was a blast.  We were taking these iconic advertising icons and creating animation cels out of them just like Disney.  People loved them.  It was quite a process to figure out how to get a lot of these images that were computer generated onto acetate like a traditional hand drawn animation cel!

But then over time, I had a whole other vision of doing these rubber ducks that looked like celebrities…thus, CelebriDucks was born!  This was really tough also, as we were putting so much detail and complexity in design into them that it basically had never been done before.  Plus we had to really find a way for it to remain a duck while still giving the sense of the celebrity!  Fortunately it worked!

We actually decided to sculpt all our ducks by hand as opposed to doing everything in a computer.  We did all this in the USA which no-one else was doing.  But then we had to find people overseas to create the wax molds, production molds, spray masks, etc….it is one very long process.  We can work for 6-9 months on one duck sometimes.  It’s crazy.  As they say, the devil is in the detail.  Because even after you work out the design it has to be engineered to float upright and thus weighted correctly.  It can’t be too soft or too hard and the painting has to be spot on.  The back and forth between the factories, artists, designers, etc. is very very time consuming.  But that’s what it takes. 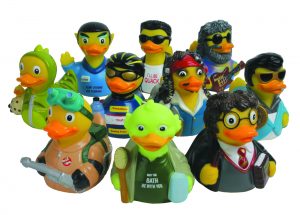 One of the biggest resources for me honestly was the internet search engines.  Every time I needed to find help, find contact at companies, find artists, factories, etc. the internet was my go-to resource.  I don’t think I could have started these two successful companies as quickly as I did without it.  Social media is also huge.  Now, with Facebook, LinkedIn, Twitter, Instagram, it opens up a whole other level of dialogue to find people and resources that people never had in the past.

As an Amazon Associate we may earn from qualifying purchases.